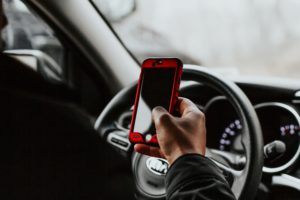 ed and decided in provincial court.  The decision in the case is that “use” is a necessary element of the offence.  Most people have not read the Motor Vehicle Act or the Use of Electronic Devices while Driving Regulation so they are not familiar with what “use” actually means in this context.  Most people assume that they must be speaking on the phone, texting or holding the device.  This is not accurate.  The Regulations state that “use” includes: watching the screen of a device, holding the screen of a device, operating one of its functions and communicating orally via the device.

Many officers have interpreted this to mean that an electronic device should not be present in the vehicle if it was not secured.  They would charge you even if they saw a cell phone in your cup holder or on the seat next to you. What the Court ruled in this case is that there must be some other element proven beyond a reasonable doubt to show that the driver was using the device.

This means the following actions would remain illegal under the Act they are being accompanied by a further element of “use”:

If you want to ensure that you are in full compliance with the law (and also not tempted to look at the screen of your phone when a notification comes up), the best practice will be to either fix the phone in a mount (if you are a class 5 driver – no N’s) or have the phone in your pocket or other out of sight location.  However, if you have received a ticket for having a phone laying out (and not doing anything else) you can now rely on this case for a defence to the charge.

Drysdale’s is happy to assist in your defence (as two cell-phone tickets on your record can result in a prohibition from ICBC and only one for N drivers).  Contact us at 604-LAWYERS for a free consultation on your case.